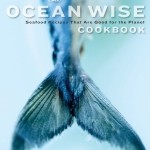 When Jane Mundy wrote The Ocean Wise Cookbook five years ago, most of the chefs who contributed recipes were from Vancouver where the move to seafood sustainability in restaurants began in Canada.

Las Vegas was never on my radar. I’m not a gambler and my idea of a vacation is rest and relaxation, peppered with great food and wine and a splash of culture. I’d bet that Bugsy Siegal, when he opened the Flamingo in 1946, didn’t foresee gambling as the fourth reason, behind entertainment, dining and shopping, why Sin City attracts 40 million visitors per year. 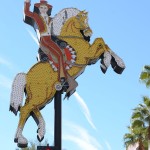 I checked into the Delano Hotel, which is like an oasis in a sea of cigarette smoke and slot machines. It’s part of a new trend on the strip, where boutique lifestyle hotels are replacing the ‘bigger is better’ mega-resorts.  There’s no hustle and bustle, and not one slot in sight.

Start the day at Delano’s Della’s Kitchen, where morning joggers fuel up on screaming fresh beet juice with pineapple, apple and ginger. Or the Mojave: a concoction of orange, carrot, lemon, ginger and cayenne. Billed as “historic farmhouse meets urban kitchen,” the restaurant also offers comfy classics. Try their sinful mac’ and cheese for breakfast because in Vegas you can do anything. Read more…The New Vegas 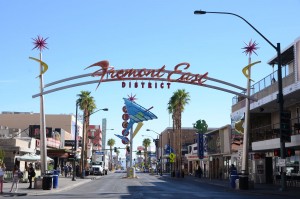 At Vancouver’s popular Kintaro eatery, manager Yoshi Negishi says their most popular ramen is miso with BBQ pork. Though you won’t find it on the menu in Japan, cheese ramen—a topping of melted Swiss cheese and mozzarella– is their biggest seller with Caucasian female customers and unique to North America, according to Yoshi.

Shouting above all the staff yelling “Irasshaimase” (please come in), and “Konichiwa” (how are you) to each customer, Yoshi says despite the constant line-up, most people spend only half an hour seated, just enough time to slurp a bowl and down a brewski. “My Canadian friends first looked at me funny when I slurped,” he says. “It’s normal in Japan, and I think slurping is catching on here in Vancouver—it tastes better that way.” 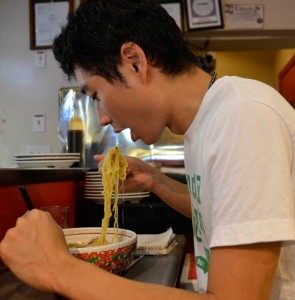 Worldwide, Ramen etiquette only dictates that you use chopsticks to eat the noodles and toppings, then drink the soup from the spoon. To thoroughly enjoy ramen you have to eat it fast, otherwise the noodles get soggy. Slurping helps. “Some people feel embarrassed, so I guess it takes some getting used to,” says Yoshi, laughing.

When Kintaro opened in 2000, only a few ramen eateries existed in Vancouver. Now there are dozens throughout the Lower Mainland. Every day, Kintaro’s cooks start the dashi (stock) from about 100 pounds of pork (and sometimes chicken) bones at the crack of dawn. Vegetables are added later in the day, and it simmers until midnight—enough for about 500 bowls the next day at less than 10 bucks a bowl. 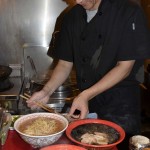 At a pricier joint like Momofuku in New York, your noodles will be made on the premises with white pearl flour (from winter wheat) boiled in filtered or carbonated water, with Berkshire pork for the broth.

A chef once told me that “fat is love”. My two slabs of pork belly float atop hearty broth glistening with beads of oil, cut with crispy bean sprouts and green onion, and then the chewy noodles—ahhh, rapture. This is the ultimate comfort food—Ramen Oishikatta (really good ramen)!

Who’d ever think of octopus salad as festive?

I bought two pounds of octopus from The Daily Catch on Commercial Drive (took about 20 minutes to defrost) and it served 8 guests.

I just happened to have a pomegranate on hand and a few sprigs or arugula in the garden. My dinner guests loved it (or so they said) so I thought you might too.  Two packages of octopus only cost $20.

Cool the tentacles, brush with a little olive oil, and chuck them on the BBQ for a few minutes.

Here is the recipe, minus the pomegranate.

Pomegranate outside Pippistrelli Villa in Tuscany.

A Vancouver gastropub lets you eat and drink for free (but, yes, there’s a catch)

THE GLOBE AND MAIL:  Come for the food, stay for the banter.

Fifty hungry diners take their seats at a 12-metre-long community table, eager to see what chef Paul Haldane has in-store. But before they can dig in, they roll up their sleeves – and pit about 450 kilograms of fruit.

It’s all part of the Irish Heather’s Pit for Your Supper series, which gives patrons a free dinner and beer in exchange for manual labour.

“It’s been a runaway success – and it’s my cheapness coming out in me,” owner Sean Heather says with a laugh.

Like most restaurants, the Gastown gastropub buys fruit from wholesalers. To buy directly from an orchard, say, would be costprohibitive – unless free labour is involved. But Heather listens to his customers: They want to eat local and know where their food is from. So he came up with a compromise.