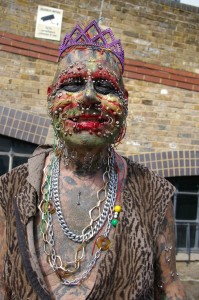 Camden Town, in north London, is a people watcher’s paradise, a vibrant outpost with a gritty working-class core that is paradoxically home to posh restaurants and of-the-moment celebs such as Amy Winehouse.

By 10 a.m. one recent Saturday morning, every form of life has already hit the scruffy high street. Throngs of goths, punks, hippies, rockabillies and other fad followers are moving en masse along Chalk Farm Road to Stables Market.

“Skinheads and goths take their identity seriously,” explains long-time resident Michelle Roland, who with her husband, Fred, has agreed to act as my guide for a day touring Camden Town. “To the average tourist they may look tough, but most of them are office workers and shop assistants dressing up for the weekend.”

Still, I’m a Canadian, unused to large eccentric crowds. I clutch my purse tightly as we slowly snake our way along the route to a covered section of stalls known as the Camden/Buck Street Market, a hunting ground for Doc Martens knock-offs, leather jackets, clubwear and black T-shirts – what Michelle (whose day job, incidentally, is designing costumes for strippers) calls “throw-away clothes.” Just about everything is less than £20 – and these days £1 equals $1.76, the most favourable exchange rate since 1985.

As the crowds thickens, Fred tells me that Camden Town is now one of London’s main attractions. “In the early 1980s, there were just a few stalls on either side of the street selling cheap clothes, records and drug paraphernalia,” he says. Today there are 500 shops and stalls in Stables Market alone, and Camden attracts more than 100,000 people every weekend.

We inch our way to the Stables Market, where a United Nations of food vendors resides – no fast-food franchises here. I have a freshly squeezed orange juice and, a few stalls later, order a barbecued Brazilian steak sandwich, which is gobsmackingly good, to coin a Britishism.

Next, we venture into the bowels of the Loch Market, passing every cuisine imaginable, to Kim’s Vietnamese, nestled between a manicure bar and a tarot reader. Kim’s pho is a must-eat. Reinforced, we marched onward and upward to higher-end stalls, including a tailor of men’s fine shirts, art supplies and craft stalls, and the ubiquitous sellers of crystals, incense and drug accoutrements.

To the left of the old horse hospital, we checked out Cyberdog, formerly Gilbey’s Gin House. According to Fred, it was once a stall in the market; today, Cyberdog is represented by two huge floors of hard-core techno gear. It is like exploring another dimension. Many ogle the expensive gear but no one seemed to be buying, or even trying on, the bizarre foamy spacesuits, bearing price tags north of £400.

Upstairs, the Proud Gallery displayed black-and-white photos of the Sex Pistols. “We’re having a Sid Vicious revival in Camden, like a mini-cult,” Fred says, “but the goth scene dominates.” At night, the gallery stages burlesque shows. (The town council is trying to shut them down, but the dancers insist their art has nothing to do with striptease.) At a bar on the same floor – a former stable – we order mojitos and repair to one of the stalls, each of which has a different theme, from goth to grunge.

Back on the street, Fred and Michelle point out that we could escape the madding market crowd with ease. Tranquil Camden Loch is part of the canal system that runs alongside the market (and all the way to Scotland). It, too, has its share of colourful characters. “I had my first eyebrow piercing 15 years ago,” says John Lynch, who tells us he is 78. “But I waited until I left my bank-teller job to get all these tattoos.” Lynch says he makes about £50 a day charging tourists £1 to pose for a photograph with them (me included). Barge tours run regularly from Walker’s Quay (next to the Secret Society of Vegans shop), sailing through London Zoo and Regent’s Park to Robert Browning’s Island at Little Venice and back. 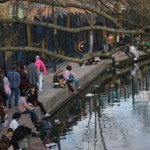 But we decide to wander down Chalk Farm Road, checking out the impressive array of boots and leather goods (there’s an Aldo factory outlet where bargains abound). Locals favour Punk Glamour (women’s fashions), Episode (retro and vintage) and LCB Surf Store (surf and skate gear). Resurrection Records is the home of alternative music; Amsterdam of London is Camden’s famous headshop.

Not all that long ago, Brits would go slumming in Camden Town, mainly for the pubs and cheap music venues. In addition to shopping, it’s now a hot spot for pubbing, clubbing and eating.

Within walking distance, you can indulge in fine dining at Gordon Ramsay’s pricy new restaurant, the York and Albany or, as we do, go for the authentic Brit experience and chow down on jellied eel, meat pie and mash at Castle’s. Fred’s 85-year- old father, Ken, was our dining companion, a regular. The establishment is standing room only – always a good sign.

The Castle opened in 1934, and Ken has fond memories. “Years ago, they sprinkled sawdust all over the floor so the jellied-eel eaters could spit the bones on the floor,” he tells us. “In those days, we had turn-ups in our trousers, and when I got home my wife would always know where I’d been.”

On Ken’s advice, I order the jellied eel as a starter. A grumpy overworked server scoops a grey gelatinous mass from a plastic container and plops the quivering heap on my grey ceramic plate. I take one bite and decided to move on to the pie and mash, which Ken suggests I order with “liquor,” which I figure will be a thick gravy. Wrong. The pie and mash is rendered even more tasteless smothered by a thin green glue made of water, flour and parsley. Truly revolting.

I should have gone for kebabs instead at the Marathon Kebab House, also popular for late-night drinking.

We decide to head off to the Hawley Arms, where Ken has a shot of whisky chased with a pint of bitters and I have a lovely steak-and-kidney pie that renews my faith in English grub. The Hawley burned down last year, but locals lobbied the council to get it rebuilt.

Nearby are several clubs and music venues, such as the Enterprise, the Electric Ballroom and the Monarch. “Camden was asleep until the 1960s, when someone thought about renting out the Roundhouse for bands. It was a building used to turn trains around before the reverse gear was invented for trains,” says Fred. “By 1967, the Doors, the Who and David Bowie had all played there.”

Until then, he says, the population was mainly Irish, but with inexpensive housing the English, Scots and Welsh moved in in the ’60s. “And that’s why there are so many pubs in Camden Town,” says Fred. “The Irish would fight the English and so on, until they had pubs built specifically for their kin.”

One of the most popular clubs is the Underworld, beneath the World’s End Pub, across from the Camden Town tube station. It’s the spot to catch alternative bands: goth, metal, electronica, rock, punk et al. on Friday and Saturday nights. Across the street, the Jazz Café brings in world beat and jazz names. We buy tickets for that night’s performance; by 9 p.m. the dance floor is packed. We make our way upstairs to the bar, order a round of margaritas, perch on high chairs and watch the band in comfort.

On my way to Heathrow Airport the next day, nursing a hangover, I tell my taxi driver about the awful eel, meat pie and mash I’d consumed the night before. “You only eat there with a hangover,” he said, laughing, “and you have to pour loads of vinegar and chili oil on the pie to liven it up. It’s the cure.”

I’ll try that next time. And I’ll also pay more attention to what I buy. My friend’s 18-year-old daughter is thrilled with my clothing purchases – I passed them all on to her without even trying them on when I got home to comparatively staid Vancouver. I feared I’d look like that other disgusting dish, mutton dressed as lamb. Pouring vinegar and chili oil on me wouldn’t have helped that.